We sat down with Arjun*, a recent graduate from the University of Southern California, and discussed in depth his views as a college graduate, social good and managing finances.

A Perspective of a Recent College Graduate

The Federal Reserve — Bank of New York, Household Debt and Credit Report for Q1 2018, indicates that the total household debt has reached a new peak in the first quarter, rising $63 billion to reach $13.21 trillion. The report indicates 0.6 percent on mortgages, 0.7 percent on auto loans, and 2.1 percent on student loans this past quarter, and a decrease of 2.3 percent on credit card debt.

Arjun describes some of the problems encouraging spending of college students, “I look at my friends and so many times I’ll hear ‘I don’t have money. I’ve spent too much. I only have $4 in my bank account.’ Here in America, it’s a culture of earn and spend. There are lots of avenues to spend money and people do it. They go to beaches and fancy restaurants, and take trips to Vegas. Back home in Bangladesh, even if I earned a lot of money, I wouldn’t have so much to spend on. We only have a few cinema theaters and restaurants.”

Arjun shares that it was a transition moving to a new country where there is an overload and constant flow of products, things to do, and places to go. He laments that the options to consume are endless and frequently, so is our spending. We move at a fast pace and don’t allow time to think about impact of our actions.

Our BERD report, The Student Debt Crisis, shows the staggering numbers. Arjun agrees, “College is stupidly expensive here. But students still pay because they want job security in the future. ”

His Passion for Giving Back

“Living in Bangladesh where 90% of the population is in poverty has made me aware of my privilege. Back home, everyone gives to the beggars, which is essentially what we call homeless people. But in America, people turn a blind eye to them because they think these people are lazy and deserve to be poor. It really hurts me when I’m walking in downtown LA and I see homeless people asking for money. When I started to manage my own finances, this privilege was always in the back of my head. Before I spend, I ask myself do I actually need this and why?”

The World Bank informs us that 24.3 percent of Bangladeshis live in poverty and 12.9 percent of the population live in extreme poverty. However, between 2010 and 2016, poverty rates were significantly reduced declining from 21.3 percent to 21.3 percent in urban areas and from 35.2 to 26.4 in rural communities. In California, The 2017 Annual Homeless Assessment Report (AHAR) to Congress shows us homeless population has jumped nearly 14 percent from 2016 to 2017 reaching more than 134,00 people.

Living in Los Angeles for the past four years, he shares his outlook on one of the top ten most expensive cities to reside in America. According to Niall McCarthy, a data journalist at Statista, a single person needs to have an annual income of $49,000 to even rent a property. With this high cost of living, the average annual expenditure of a Los Angeles resident comes to a total of $64,000. While Arjun has adapted to the Los Angeles culture, he reminds us of his childhood that ultimately shaped his views on money.

Arjun is passionate about giving back,“I’ve been looking into homeless shelters and seeing if I can volunteer with them bi-weekly. Or even by donating to causes that help solve the problem. If I can’t donate my time, I can donate my money.”

Over the past few years, homelessness in the California has become increasing apparent. Gentrification and development has pushed people out of the alleys and into the open with ‘tent cities’. In 2016, California legislators passed a state bond that will bring $2 billion to address the problem and provide housing for the homeless who suffer from mental illness. California continues to invest into solving this problem but Arjun has reminded us that we can all make an effort. He shares that donating time or money, large or small, can have an impact.

“Among the upper-class people in Bangladesh, everyone does charity. But it’s more like a competition. They’ll say things like ‘hey I bought 2000 blankets for the homeless’ and then post it on social media. The majority of Bangladesh is in poverty. A lot of people are in need. Even though we live in an upper-class neighborhood, I see the beggars once I drive out onto the main streets. I see 6–7 year old kids selling things on the roads trying to make a living. Once I grew older, this has affected me so much. My family’s deep belief in giving and acknowledging our privilege has made me very cognizant of how much money I spend for myself.”

“Often people are desensitized to it because they don’t experience it. They live in their own neighborhoods. Compton is a different world than Beverly Hills. People tend to think when people are poor, it’s their fault instead of the system’s fault. But it’s a systemic issue that stems from lack of support.”

As a recent engineering graduate, Arjun plans to stay in Southern California and has taken a position with a cybersecurity company. He told us that his passion is data security and is excited about the promise of the decentralization of blockchain.

Arjun hopes that Bloom can create a more fair and accurate credit system. He shares, “There’s definitely a need for alternatives to existing credit scores. The thing I hate about credit scores is when you go somewhere to check your credit score, it decreases by a couple of points. That’s stupid. You should be allowed to go shopping for a car without that decreasing your credit score. I hope that Bloom solves that problem.”

At Bloom, we are continuing to learn just how the current system affects all demographics. Arjun’s perspective sheds light on what we can do, well beyond the comfort of our computers. Bloom’s mission is to give back control to the individual for a more just and fair system. These conversations also play a role in the bigger picture as an exploration of our relationships and cultural differences enable us to find a common ground as a collective global species. 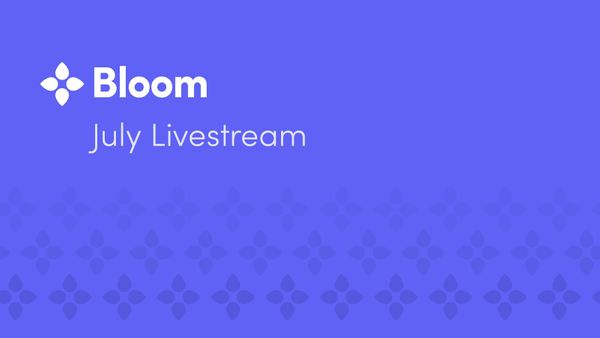 Thank you to everyone who joined us for the official July Bloom Livestream. This is one of our most significant livestreams yet as we…

This past year, we have been rocked by massive data breaches (Equifax, Cambridge Analytica, and more) and the gross neglect from…