Thank you for making this past week the biggest week for Bloom yet!

This week, we set many new personal records.

We saw a record spike in traffic after additional news of Equifax’s data leak. On top of this, Bloom received Tier 1 press coverage in Venture Beat, registrations for BloomID rocketed to an all time high, and Bloom is currently on pace to be one of the most used Ethereum dApps to-date.

Over the past few months, we have been hard at work — heads down in creating a product the entire crypto space can rally behind. Our upcoming Phase 2 launch will bring numerous features and enhancements towards a better user interface, additional attestations to the Bloom network, a mobile app, and renewed interfaces that are friendly to both crypto newcomers and experts.

Put simply, the timing for this big week couldn’t possibly have been better.

At Bloom, we believe that data is everything. Here I share some record numbers for our first quarter.

We’ve consistently been blown away by the support and interest from the community, but we’re even more proud to share a momentous record for Bloom.

We’ve surpassed more than 50,000 people in our community!

As one of the largest and most active communities, our Slack and Telegram groups have an all time high of 17,000+, while tens of thousands more have joined the community through Reddit, Twitter, Email and other social channels.

Many projects have a large community, but very few convert that community into actionable holders. As a result of the fact that Bloom has a live Mainnet dApp, equipped with voting, invites and registration, we have a significantly above average conversion rate from passive community members to active holders.

In total, Bloom Token (BLT) has surpassed more than 10,000 holders of the coin.

Perhaps the stat we are most proud to share is our increasing dApp signup rate. Few projects can stand behind an active community, large token holder base, AND sizable dApp users.

This week we saw record highs for number of signups compared to prior weeks.

Week-to-week, dApp signups are up 508% compared to the previous weeks.

Even though March has only just begun, we have already see that average daily dapp signups in March are +789% as compared to February. The first few days of March alone has already driven 24% more signups than all of February. We’re looking forward to the launch of Phase 2 and our mobile dapp to keep growing, and improving on these numbers.

To date, 4597 users have created BloomIDs!

Of course, no traffic stats would be complete without highlighting the website spike. In fact, our website spike experienced such high volumes of traffic, that some users were experiencing intermittent downtime as our front-end website was keeping up with the load of traffic. Bloom.co went down on March 1st due to the big wave of inbound traffic (See our public website status tracker).

This March, we had a string of record setting days:

It’s worth highlighting that the traffic to Bloom.co in the first 4 days of March was almost double traffic from the entire month of February. As for a daily site traffic average, thus far in March the daily average is 13x higher than in February.

Stay tuned on the important conversations surrounding Bloom and the future of credit. 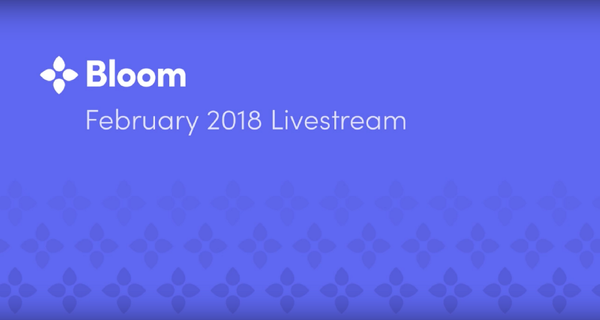 Thank you to everyone who joined us for the second official Bloom livestream. Here is a summary of the updates we covered!