The Molecule Protocol demonstrates a powerful 2021 rendition of the utility and benefits offered in multi-signature technology in the cryptocurrency space. In multi-signature cryptocurrency wallets, the hashed signatures of multiple addresses are required to reach a majority vote in co-signing a transaction or ‘decision’. The Molecule Protocol innovates on that development through new levels of ‘value’ across these aforementioned signing parties, rather, instead via the form of multi-connected tokens. Built upon the infrastructure of 0x’s Bloom Platform, within the Molecule Protocol, different ‘molecules’ (Customized ERC-protocol tokens) facilitate digitized identity verification and capability on the blockchain. The Molecule Protocol is one of the more recent examples of the harnessed power of 0x’s Bloom Platform for progressive self-sovereign identity development.

Centralized exchanges are custodial and compliant, relying on KYC (Know Your Customer), AML, CFT, etc. while controlling customer funds and incurring high fees despite its multiple restrictions. Contrastingly, decentralized exchanges (DEXs) are unrestricted, have no KUYC, AML, etc - you have full control of your funds, and there are significantly smaller fees. The cost of this decentralized nature has been the lack of knowing who you are exchanging with. While the anonymity and speed of certain DEXs are what make them so favorable, it is also unpredictable and difficult to gauge which users are valid and which are risky, creating insecurity and apprehension from global regulators to further evolve the sector. The result has been a rift between the legacy financial sector and the new age of financial technology. Molecule Protocol aims to solve this via a user-friendly infrastructure that handles the transfer of ERC20 and/or ERC721 tokens only if certain constraints are met for both the sender and recipient. In this way, the Molecule Protocol bridges the aforementioned gap between the two exchanges since it retains the autonomy and self-sovereignty that decentralized exchanges present, however adding constraints that centralized exchanges enlist as a means of security. The protocol is considered non-custodial yet compliant.

For those not familiar with chemistry or blockchain, the system is still user-friendly and little to no knowledge of chemistry or blockchain is required to use it, making it a perfect stepping stone for those who want to learn more about blockchain, crypto, and self-sovereign identity. Each token (ERC721 or ERC20) represents an ‘atom’. A combination of tokens, such as 2 ERC721 tokens and 1 ERC20 token (like a hydrogen atom: H2O), can authorize functions on an entity. Only if an entity contains a KYC token can the transfer be executed. The concept is reminiscent of chemical reactions since the reactants are individual entities until the ‘reaction’, or in this case, ‘authorization’, occurs. Other molecules and subsequent structures can be configured, however the smaller the protocol, the more it can fit into the Molecule format rendering it more useful compared to larger structures. Tokens can be transferred to a sender and recipient on a DEX or marketplace without any restrictions. Molecule protocol applies the same concept except with an infrangible validation process,  creating the security of validity the current digital financial environment lacks.

Users must first create a Protis account that provides an Ethereum wallet address. Then the user must go through ID verification to obtain a KYC token. In the Molecule Protocol, KYC represents the ERC721 token. Without any way to prove to banks, and even landlords, that you are trustworthy, there’s many times retail users struggle to get an apartment lease, mortgage, tuition, or car loan, creating seemingly unfair exclusivity. To mend this exclusivity the Molecule Protocol utilizes BloomID as verification and Bloom’s credit score system to include those who may not have traditional data. If approved, the KYC 721 token is issued from ‘OnRamp’, Bloom’s smart contract ‘bridge’.

Bloom creates a digital identity called a BloomID for those who cannot acquire verification via traditional data. With their BloomID, they can securely apply for credit as soon as their identity is verified. There is no need for a SSN which is beneficial to those who may not have a credit history. Rather than submit a credit score, users upload a personal form of ID - which can be in the form of a license, email, phone number, utility bills, or any other financials available or that are considered unconventional. All this data is then used to assess the user’s ‘credit score’, as well as how trustworthy the user is in relation to risk. Both the sender and receiver are able to track the sender’s credit score, utilization, age of credit, or payment history. After deploying, exchanges/marketplaces can validate addresses using Molecule Protocol.

The process of using Molecule Protocol is simple enough so those without any technical blockchain knowledge can employ it. The first step is to define all ‘molecule’ structures, which Molecule Protocol provides a schema for. Once done, the molecule tokens are minted.

The security Bloom has created, despite not acquiring SSNs or tax records from their users, is revolutionary to the space, and to self-sovereign identity. Through Bloom, users receive digital identities, and through the Molecule Protocol as a whole, users, globally, receive sovereignty.

We are very excited to announce the SSI SDK! This is a monorepo that contains all of Bloom's SSI related libraries. The SSI SDK provides everything you need to integrate Bloom into your 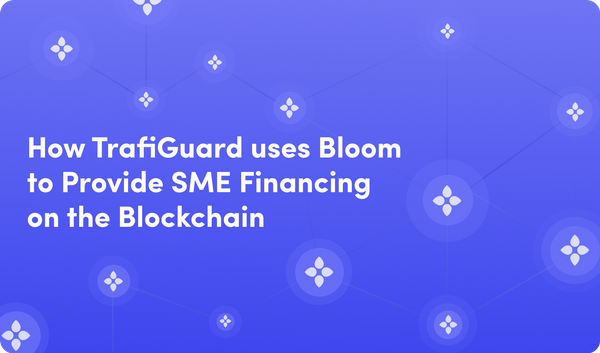 Many global small and medium enterprises (SMEs) have limited access to financing which creates an uneven playing field for those who cannot acquire traditional data. Those outside the US struggle to finance their