Fake news has been one of the most hotly-debated socio-political topics of recent years.

Regardless of what your stance is, the American Press Institute states it well, “the foremost value of news is as a utility to empower the informed. The purpose of journalism is thus to provide citizens with the information they need to make the best possible decisions about their lives, their communities, their societies, and their governments.”

News hoaxes aren’t something new, but in the recent years, more and more outlets are caught making up facts to pull clicks and attention. So much so that over 25% of people surveyed stated they no longer trust the “news” they see on social media. Facebook has employed 100’s of fact checkers, Snopes traffic is an all time high, and consumer distrust is mounting.

With seemingly no end in sight, the fake news problem is only getting worse.

We are incredibly inspired by CryptoSource. This is a project that is incredibly important for our time.

CryptoSource uses BloomID’s setup to implement a provable, secure, news citation. Personal information of the “whistleblower” remains confidential, yet validation and verification of facts exists beyond the shadow of a doubt.

With a future powered by CryptoSource, completely unaccountable “anonymous source” citations can now be cryptographically confirmed. Now a reader can view an “anonymous source” but that is a confirmed actual trusted source, rather than a random false quote with a high likelihood of being fake.

This setup would not be possible without BloomID and we’re incredibly inspired to see the future of what people will build.

Here you can find their demo video and URL:

According to CryptoSource: “We’re here to show how crypto can be used to do some good. We’re putting crypto to work to solve one of the biggest conflicts in journalistic reporting: anonymous sources.”

The team added “We need whistleblowers. Fighting corruption requires brave men and women standing up and saying, “this is not right.” But whistleblowing is dangerous and requires a lot of trust. Today, a whistleblower has 3 options when talking to a journalist for how the journalist attributes their claims.

They can choose the attribution:

Anonymity can help protect sources against retribution but without accountability or a reputation, anyone could claim anything. How do we know whistleblowers are for real while protecting their identity?”

How The Team Built It

The team shares, “CryptoSource is a dapp with a React front end built on the Truffle sweet. We used Github to share files. We started with building the smart contracts in solidity while working on the front end and then marrying the two designs together. This lead to some friction, but nothing that wasn’t able to be overcome and I think this lead to sturdy (enough for testing!) smart contracts and a pleasant to use frontend. Further we integrated with Bloom in order to gain the benefit of helping give more secret information, and limiting certain brute force attacks.”

The team highlighted that user experience will be essential to get right. They added that “The current state of the dapp presumes a basic level of knowledge of MetaMask and access to Ether. We believe a certain level of friction is a good thing — in that it will cut down on frivolous posting. However, we believe this tool is important and should eventually be made available to as wide an audience as possible.”

According to the team, their plan is to develop an embedded tool for online newspapers like NYT.com that allows reporters to directly quote sources and embed their original claims and veracity proofs directly into articles. Now journalists can actually cite anonymous sources.

They share: “We also believe there are applications in other fields:

Although this version is ‘feature complete’, additional focus on usability would go a long way for adoption. On the more technical side of things, getting it onto the public testnets is of course, a necessity as is getting the front end on a real web server. Further, deeper integration with Bloom’s ever improving API can help support even more low to zero proof identification paradigms.

Some more advanced integrations would involve adding the ability to say whether a thing did or did not happen, such as by connecting to Augur. Further the platform currently does not have great curation tools, so people will need to dig, adding curation tools could help people find the best whistleblowers more easily.”

The global data crisis has finally reached a breaking point. In the wake of the Equifax hack, the Facebook hack, GDPR, and California Data… 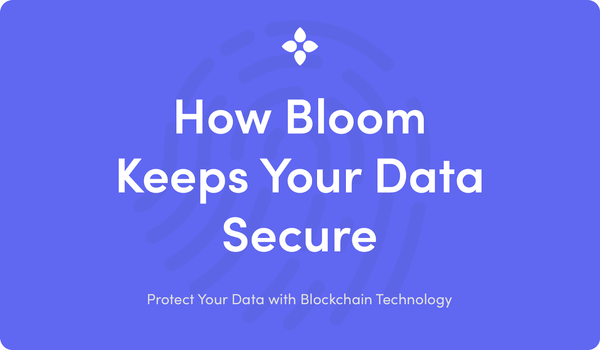 Every day, as you browse, type, and talk online, your activity is being monitored, tracked, and analyzed. Your personal information is…